zone is kind of weird.  It doesn't feel like it'd make sense in a medieval time, but it is actually a middle English word.

I might try to not give them a in universe name. Kinda like how the hex tiles in Civ or the snap placement in Age of Empires are just viewed as part of the game's structure. They're only 2 miles by 2 miles so unless they are empty, the stuff inside them will be way more prominent.

Speaking of the stuff inside them, I've decided to bite the bullet and go with a freely explorable full open world. Basically Divinity Original Sin 2 for a seamless area the size of Europe. This is a lot of work but could maybe save time compared to my original hierarchy system. With that system there were a lot of edge cases that I was struggling with sorting out and I'd have to absolutely nail the visual presentation of everything to make it simple for players to understand and fun for players to exist in. My jump from 2D graphics to 3D graphics had similar pros and cons so I'm hoping it works out a second time. The only thing I've really worried about is character icons. I cannot have 3D models for every person but with a higher quality world, it'd be hard to make anything else look like it belongs.


Within sectors/tiles/zones there will be "locations" for lack of a better term once again. A location could start as a single hut and grow into a massive city so I'm not sure what to call it. Locations have location wide upgrades similar to sectors. Buildings are built automatically at the closest point to the center with enough room. This way they naturally grow like real cities but I do not need a system for players/AI selecting specific building locations.

Been working on some secret stuff

I added an "island" setting that can rip landmasses into separate islands. With all other settings identical, here are three procedural maps generated with varying "island" strengths. 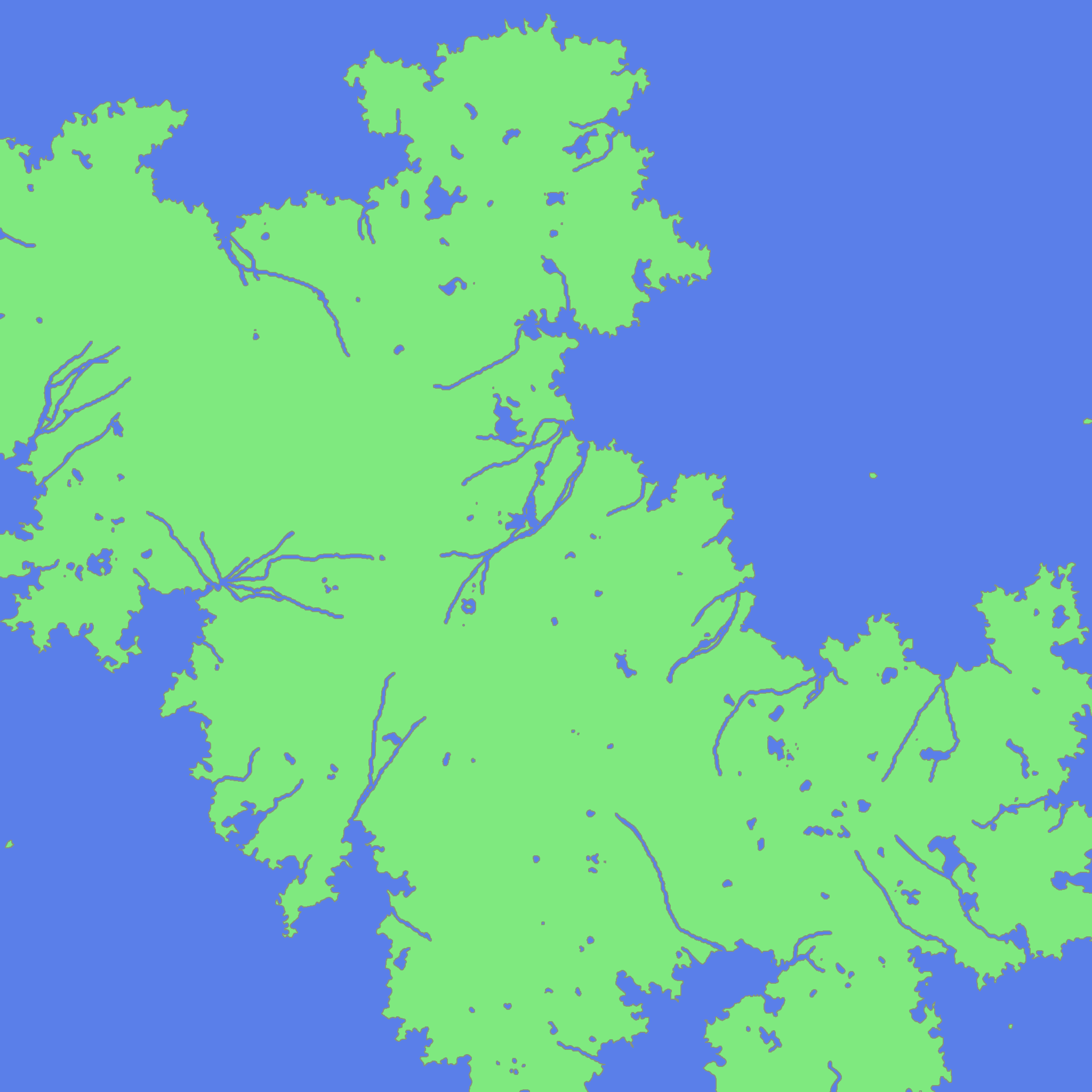 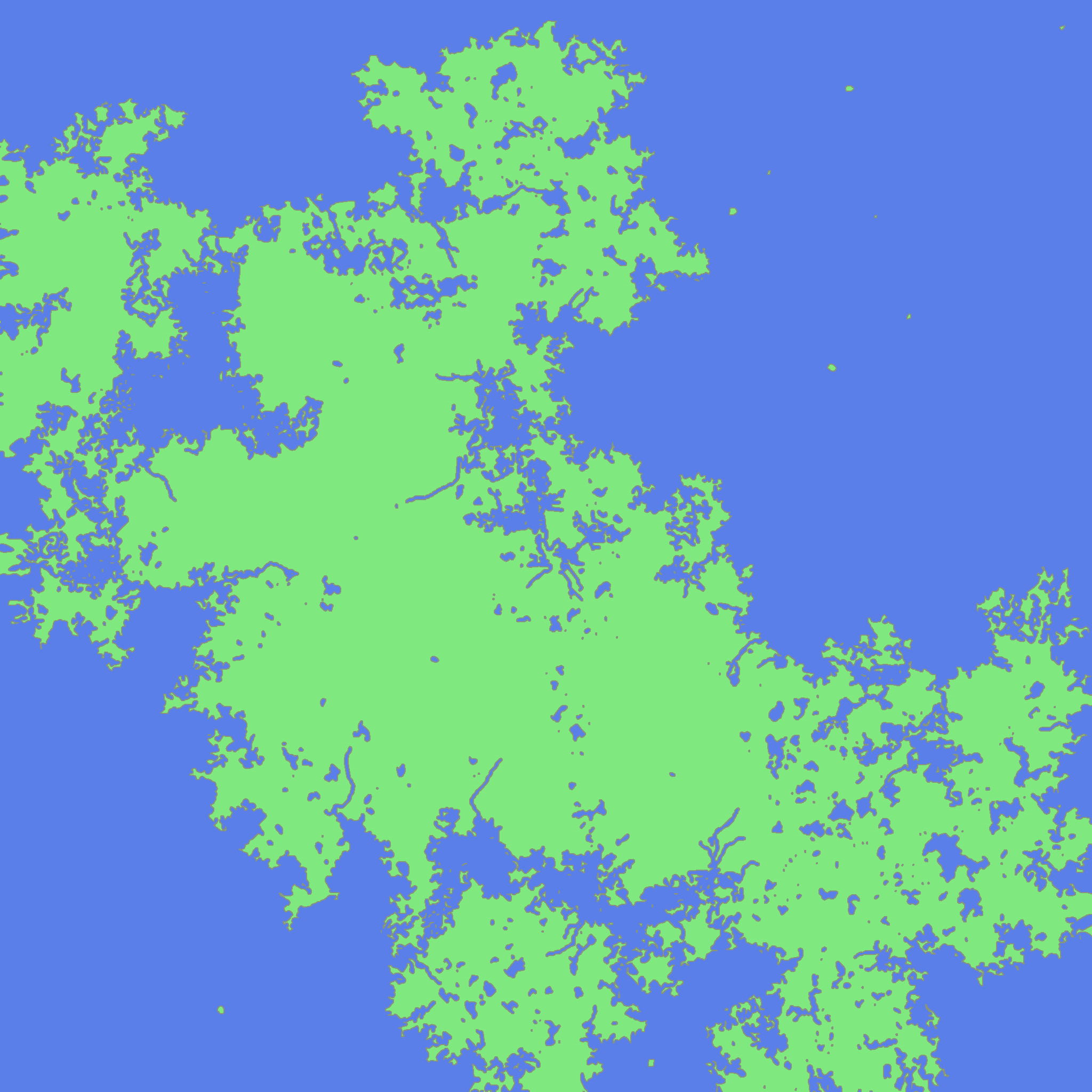 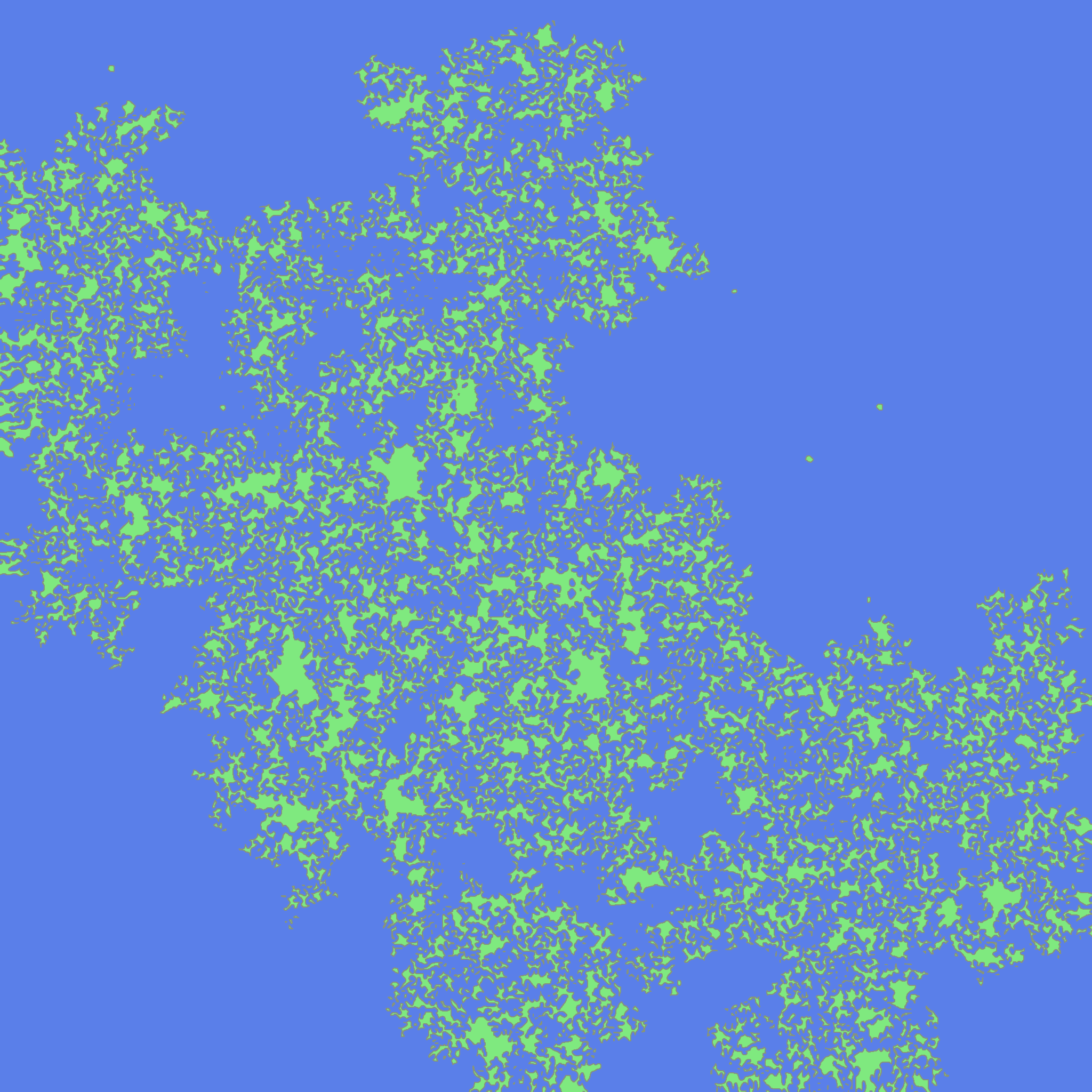 I'm still using 512x512 maps for the game. Here is what the last map looks like before being "upscaled." These pictures only show coasts. 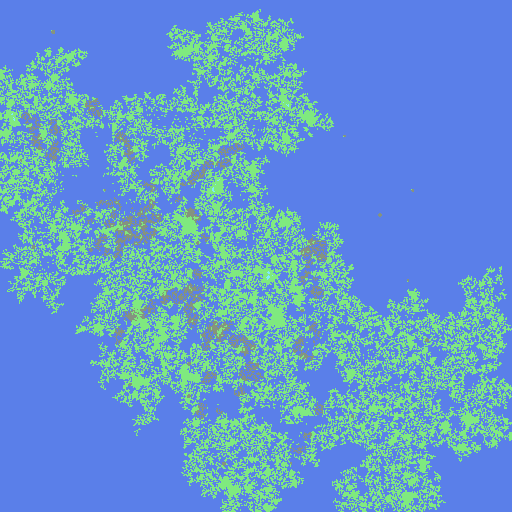 I put upscaling in quotes because the actual process is very structured. The system converts all land+water edges into a curve and smooths it out while adding a bit of random variation. 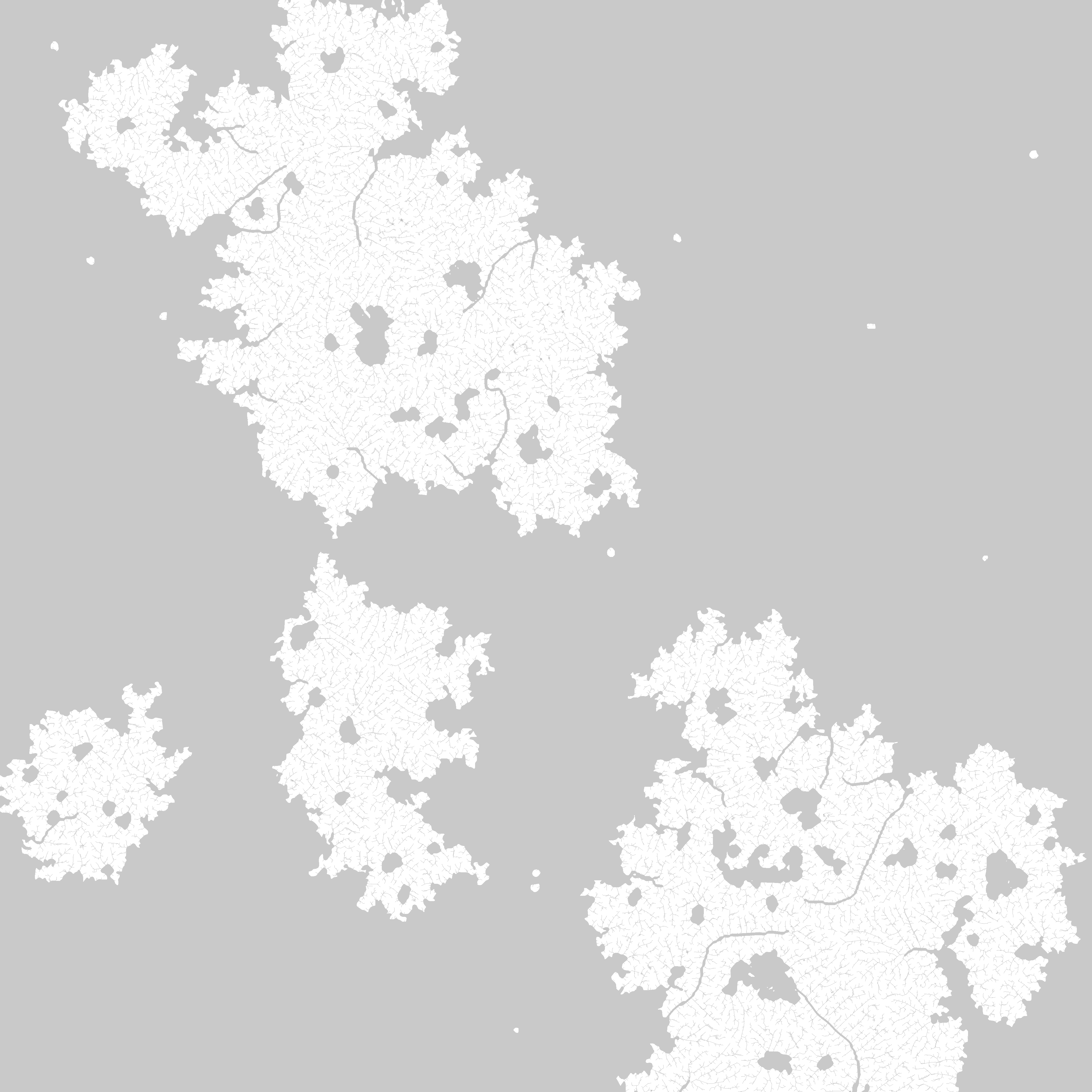 Watershed map for a procedural world. Not worried about lakes that don't drain into oceans. This map is primarily used to generate realistic feeling mountains.

I am not 100% sure how this will go down, but I want to get people playing the game as soon as possible. I'm thinking of setting up a semi-open alpha for the PC version of the game.

Adding more detail to things. Pretty complicated since there are thousands of miles of coasts that need waves, but this method might work. There are a fair amount of things I can do to improve the quality but I'm really worried about keeping the terrain performance light.

Here is a video zooming out.

Disabled grass, working on getting everything integrate.

Scale is really complicated and something that's hard to intuitively understand. I've been going around with a ruler sorting and adjusting everything haha.

Here a cube is scaled to 1.75 meters, the average height of an adult.

I decided to make mountains fantasy sized for the most part. Every square is still 2km by 2km. Since the whole map is about the size of Europe, I'm using space sim techniques for close up details.

From a gameplay perspective, that's not a good thing.


No player will enjoy spending hours/days of real world time traveling. I need such a massive map so that regions can develop independently and a player should spend the majority of their time in the same area, but even within that local area travel could be too slow.

I guess I'll break it down to multiple types of gameplay.

Local Travel:
The player only moves within a 3 by 3 sector area. They could be a king, a butcher, or anyone else that stays within a city or zone.

Regional Travel:
The player regularly moves within a 30 by 30 sector area. They could be a trader, adventurer, hunter, or anyone else that doesn't spend the majority of their time in the same place. Might slowly make their way across the map, but that is not the primary goal.

Migration:
Non regular movement over vast distances of the map. Similar to moving from England to France during the medieval era. Takes a long time and isn't designed as part of a gameplay loop.

The first mode of travel should be effectively instantaneous. Players can move within cities freely and move to nextdoor cities quickly. Traveling shouldn't take long enough to factor into player actions.

Second mode of travel could take a few minutes. Either the player is relaxing and enjoying the journey, or they are multitasking during the journey. Talk to companions, notice things along the way, browse your inventory, etc. Would be best to travel on horse.

Third mode of travel would take hours/days on foot. It is not designed to be inherently fun for players. Either the player makes many stops along the way, or the player multitasks with even more complicated things. Best to migrate by ship.

Only 6x bigger than daggerfall

Only 6x bigger than daggerfall

I've been watching gameplay of daggerfall for comparisons haha.


I'd say this video does a good job expressing just how large 6x daggerfall is.


Two cameras are used to render the scene. One for the open world and one for close ups. This is seamless and just looks like lod. Kerbal Space Program does the same thing.

Player speed will be roughly 5 meters per second. Not sure if that will be sprinting and need a cool down, but that feels about right in my test environment.

That means on a perfectly straight route it would take 6 minutes and 40 seconds to cross an entire sector. With 512 sectors, that means it'd take just over 56 hours to run from one side to the other. I think this is good.

I've decided to cut some features so that I can focus on making the moment to moment gameplay engaging. For example instead of hunting being a timer (click button and wait for food), hunting is now the physical act of catching a wild animal.

The minimum viable product has now shifted to exploring the natural world and hunting animals. I'll start granting access to the alpha build once I reach that state. 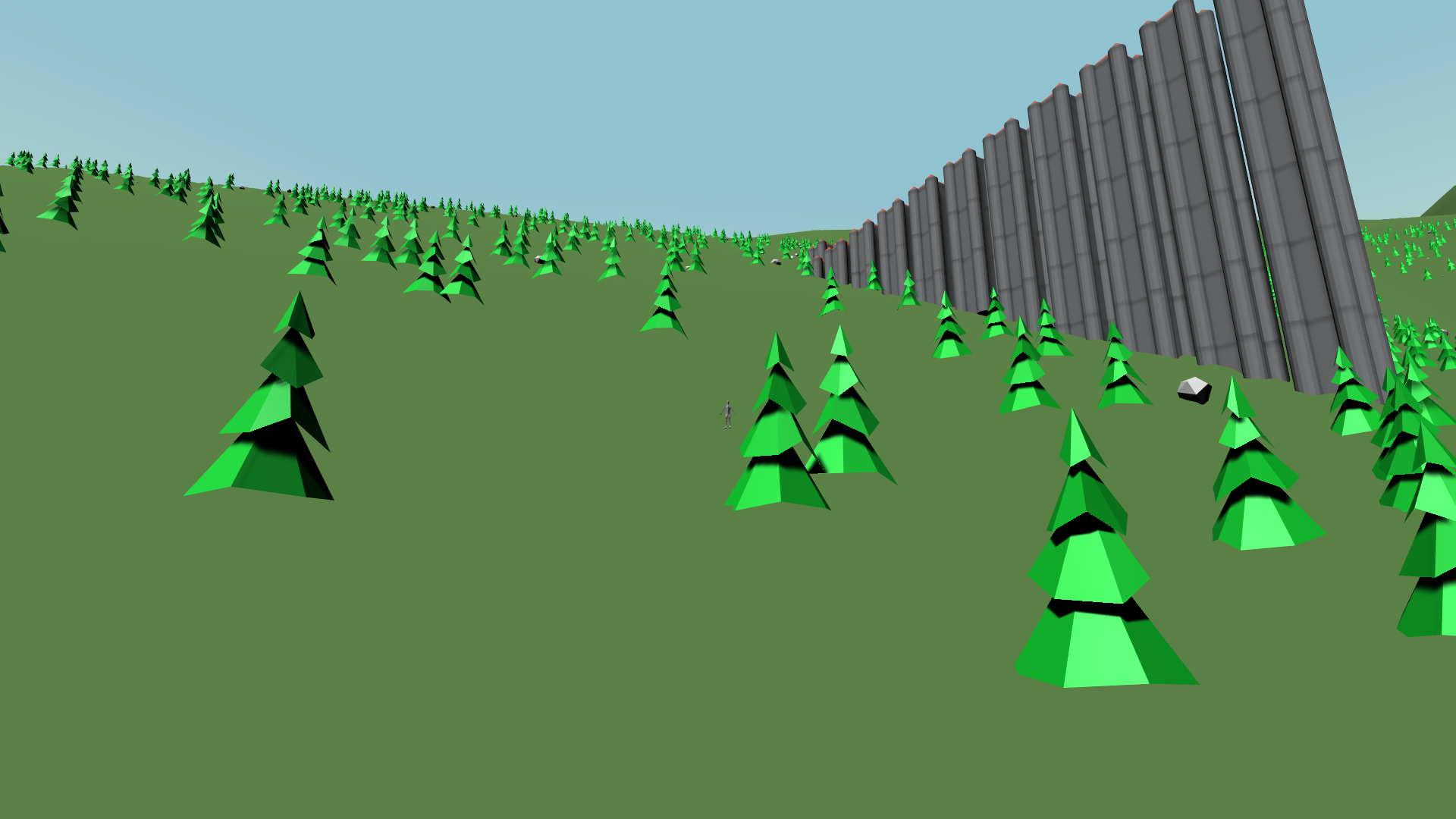 Hey look, a game is coming together!

The sun is a ball of fire only 500 miles above the world. It slowly moves north and south producing seasons. All shadows in the game are dynamic to reflect the sun's true position.

What if we started seeing that gif on flat Earth pages?

What if we started seeing that gif on flat Earth pages?

Haha I originally had used a flat earth tag but it felt too dirty.

But this is really cool stuff.

This is a lot of stuff that I've wanted to put together myself.

But this is really cool stuff.

This is a lot of stuff that I've wanted to put together myself.

The plan is to start free early access in the coming weeks. With your feedback I should be able to do this concept justice.


The lore of a flat world however came completely from left field. I've really stumbled into that and have been making it up as a go haha. It seems like the perfect way to say "hey this is your world and you get to make your own stories" but still keep the game unique compared to our world and other games.
Topic Stats Print
Go Up
Pages 1 2 3 [4] 5