lol indeed.  those games looked really boring though.  the control input of touching the button on the side of the headset seems really awkward to me.  i certainly wouldn't change my phone for this.

i'm sure both purchasers will be happy with their headset.. 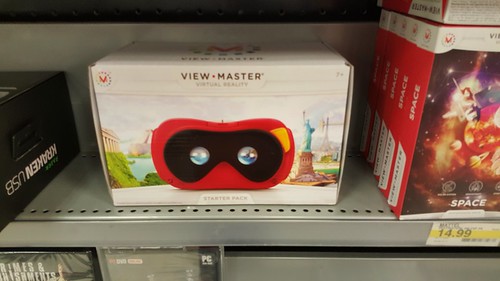 Yeah I saw it in their ad.


These cheap VRs better not ruin the market!

Sixty thousand dollars, and the first quarter next year: those were the details missing at Nokia's July unveiling of the Ozo 360-degree video camera.

Nokia calls the Ozo a virtual reality camera, but this is something of a misnomer: If you're shooting video, there's nothing virtual about the reality depicted, and what you're recording is immersive video.

The Ozo has a spherical field of view, with eight 2K-by-2K image sensors and eight microphones that record direct to a proprietary flash storage device. Its 500GB capacity is enough to store 45 minutes of video and audio, according to Nokia. The flash storage costs US$2,500.

The $60,000 price might seem high, even for a camera with a spherical field of view, but some alternatives are even pricier. For example, money can't buy the Jaunt Neo, launched in June, as it is only available for rental, not purchase.

GoPro's Odyssey will be more affordable at $15,000. It's an array of 16 of the company's Hero4 HD video cameras held in a ring by a special mounting block, and can only shoot cylindrical, not truly spherical, video.

At the lower end of the scale, pocket-sized cameras like the Bublcam from Bubl Technology deliver 1984-by-992-pixel spherical images at 30fps for $799.

Without a convenient way to watch their output, such cameras were of little interest, but since both Google and Facebook announced their support for 360-degree video, they're starting to draw attention.

Factor in the availability of wearable displays such as Samsung Electronics' Gear VR, the Oculus Rift or even Google's Cardboard, which allow viewers to choose which part of the scene to view simply by turning their head, and the market for all-around cameras is set for take-off.

Both Nokia and GoPro tout the ready availability of software tools for editing 360-degree videos -- anything running on Mac OS X for the Ozo, after the video has been run through Nokia's Ozo Creator app to translate the proprietary files into standard formats, and Google's Jump video assembler for the Odyssey.

Crazily niche market for that. https://www.youtube.com/watch?v=UgvRh2qJWIQ vr is in stable condition after the attack

A photo of the void proto type vr head, 2x  2k curved screen and custom optics. Void is a vr themed park set to open some time in 2016.

Thuway really pissed me off after the keynote. In addition to all of his barking about Sony not announcing more UI functions and for some reason insisting that Sony needed to show more first-party developed games, which they've already shown plenty this year, he kept claiming that VR is dead now. "I stand by the fans, not the company." Yeah so in other words you're jumping into a small mob mentality and not actually thinking for yourself. Yes, that on stage demo was terrible and was entirely unnecessary to begin with. However, people in the crowds were losing their shame over Ace Combat 7 for VR. The response to RIGS has been very positive. Golem has people intrigued. From the very beginning VR was never something that could be adequately SHOWN. It has to be experienced. It's what everyone, including himself, have been saying for a long time now. So then they SHOW a bad demo and suddenly VR is terrible and it's already dead? The fudge out of here. My mom just talked to me last night about that headset your put your phone into and she was all excited about it. If someone like my mom can get excited about VR then I know there are tons of other people who will be.

PS4 breakout box got a redesign.

Searched and found nothing, close if old. From the Overclockers forum:
Quote

Hello OCUK!
We at NVIDIA are hosting a very special VR event with HTC Vive on December 8th in London and weÂ’d like to invite you and a friend to come and take a journey into a whole new world!
You may have experienced gaming in VR, but weÂ’d like to show you a wider experience: explore the galaxy, polish your art skills and even get ready to be led on a once in a lifetime tripÂ… (plus a few other thingsÂ…)
NVIDIA GPUs are powering next generation virtual reality games and apps, and we invite you to get hands on with the latest VR experiences.
If you (plus a friend) would like to join us. Leave a post with the answer to the question below:
--- If you could have ONE game re-made for VR what would it be? ---
WeÂ’ll pick 1 winner on 4/12/15! See you there!
Terms and Conditions
Â•   UK residents only
Â•   Closing date: 4/12/15
Â•   Winners contacted/announced: 4/12/15
Â•   Winners must be available to travel to London 8/12/15
Â•   Travel costs not included.

https://forums.overclockers.co.uk/sh...php?t=18705601
Poster in question is an Nvidia rep. At first it was just announced to be an Nvidia event but he edited the post to include HTC recently. Given the date and the previous info of a Vive announcement on the 8th I'd say this is a good indication for release info, final consumer version shown, and possibly pre-orders opening up.